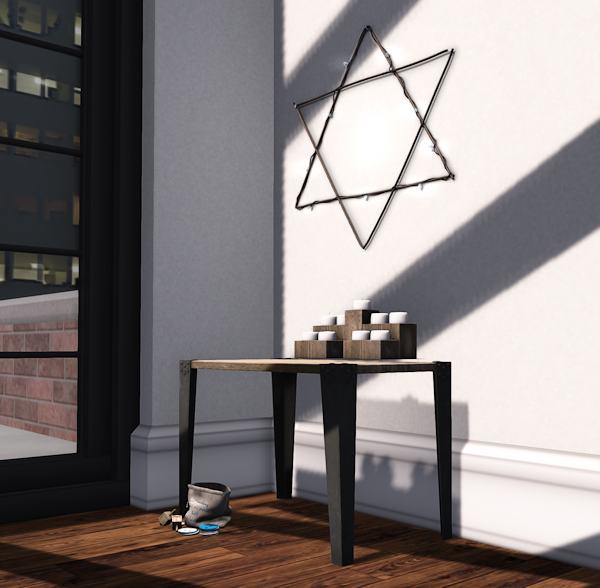 Out for The Neighborhood and just for Saturday you can find a pack of Festival of Lights items from Cheeky Pea. Two styles of Menorahs with candle lighting menu, three choices of wall stars, games and matches (found AFTER I took this photo).  The ezra table is from Second Spaces and goes very nicely. 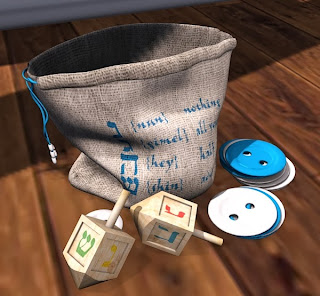 I can't really tell you the tradition behind the Festival of Lights.  I am not an organized religion gal and while I have studied many beliefs I seem to embrace parts and pieces of each. That works for me.

If this is your holiday then you will definitely want to hop on over and pick these items up while you can. And while I do not claim to understand the deeper meanings of the items, I certainly appreciate the artistry.

They have a place in my "moving in" house from barnesworth annubis. 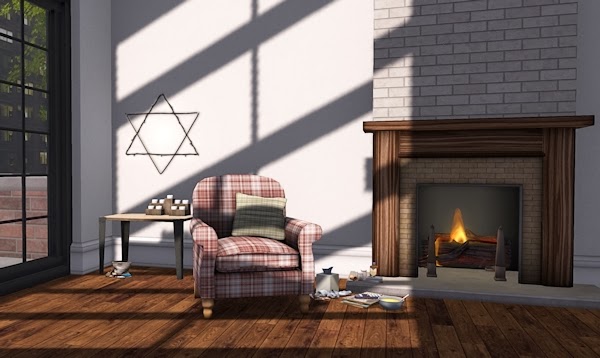 I am writing this at night and I am happy to say that my jpgs uploaded well -- that Blogger thing. Oddly enough this same sort of issue happened before -- months or years ago, I am not sure. I could upload at night and the photos were fine, but try the daytime? NOT good.

ANYWAY -- I thought I would show you my in process holiday abode. While I of course have a ton of items that I could use in this house, I decided to just let things come in as they would and let an eclectic style arise. So far it is working nicely.

The table from Second Spaces appeared out of nowhere tonight. The notecard tells me I have had it for a couple of months. It slipped by evidently. Things do. Automatic accept is good in many cases but other times not so much. OR we could just say that serendipity let it appear when it was needed. That works for me too.

Have a great weekend. Op Ed Sunday is scheduled to appear for you folks that like to read my musings.
November 22, 2013
design iheartslFeed new releases