Some friends asked me if I remembered all the places I have lived in Second Life, and I believe I do. Memories fade however, so I am linking back to photos from this blog in an attempt to have a chronology of sorts. It is too easy to forget.

I faithfully went through my old posts.  It was a good journey, looking back; from now on I will be a better housing reporter.
**********************************
As well as hanging out at Moon Beach with my kitty Pearl at the end of 2020 , I rented a plot at Gooseberry Estates where I styled two fun houses.  The first was designed in a Country Shabby Chic style with tons of clutter. It was a larger plot with more land impact than I ever used. 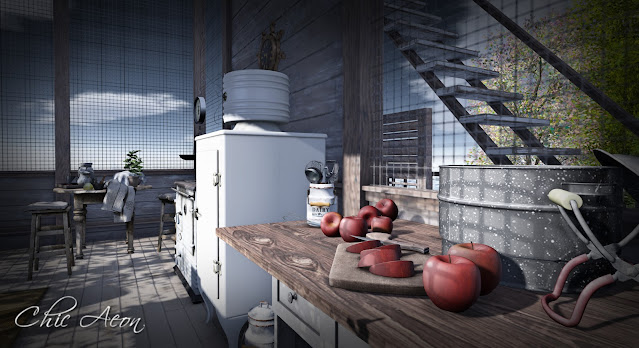 The second was a small cottage that I styled in remembrance of my grandmother who was a seamstress and definitely a collector -- and a bit of a wild child. 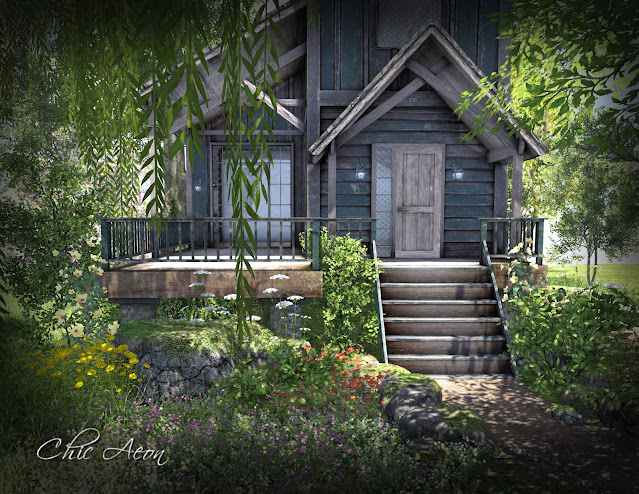 The summer of 2020 was mostly spent on my building pad. I still visited my modern house and my industrial apartment in Xenosaur, but with all going on in the world I guess I wasn't much into "nesting".  But the beginning of November brought a fantastic offer of free lodging in a snow sim, and with that came some 50 land impact styling challenges and later a move to the cutest little cabin at land level.  I really enjoyed the winter in Snow Globe and took tones of bright day - crisp air photo. 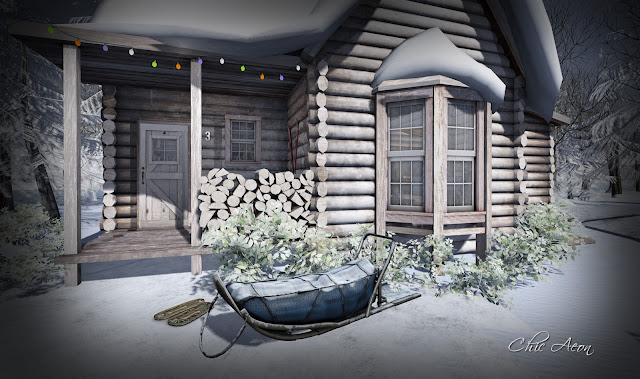 As we moved toward summer and "shelter" mandates ruled our world, I started looking for a new home to decorate.  Eventually I found a cute little number in Puddlechurch.   Beautifully landscaped the rent is fairly high but with money as no object these days I set forth on a fun styling. Low saturation, artist in residence was the theme. And a not too neat artist at that LOL.   This is a Trompe Loeil house that I had in my inventory but never used. I really like the peacefulness of the Puddlechurch the sim area, but I still have my modern house in the mini-city. 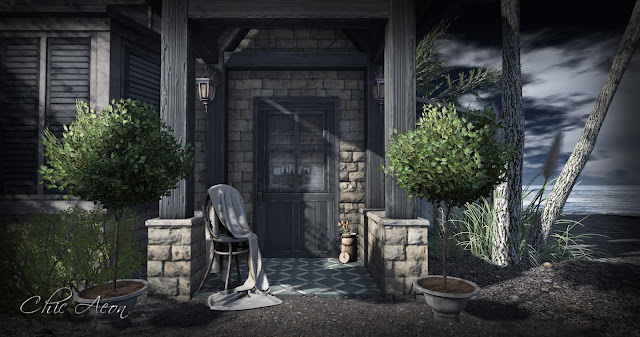 Deciding in the early Spring of 2020 that I had had my full sim experience for awhile, I moved my shop to a 4096.  Since Tilia came on the scene in August 2019 I have been scaling back on work. The store is still open and doing well, but rest is good.

I found a cute little mainland town in Xenosaur where I opened a free art gallery and a bit later rented a large modern house on a cul de sac :D.  With plenty of prims, it has been a fun decorating experience.

As the new year began I moved from both Strand and Peony to a condensed space in Carbonara. The shop is at 2000 feet and the Recyled Victorian which I made for myself in Opensim is part of my once again favorite theme, Road to Nowhere. It is small and intimate but it works nicely.  In a downsizing and rest mode of late and this will be find for awhile. 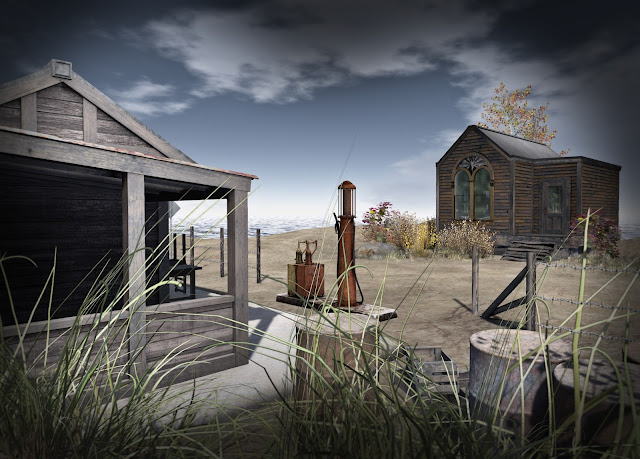 In the Fall of 2019 I found a lovely region with lots of character and an moved into an Apple Fall home for awhile.   I can't say that I spent much time there but I certainly enjoyed decorating -- and the views. 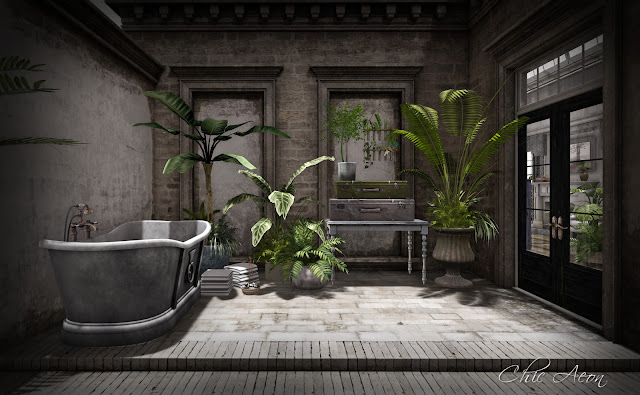 With the  LEA core sims due to close at the end of August, 2019 I began moving some of my favorite areas over to a new sim -- aptly named after one of those aeas, the Road to Nowhere.   I have to say that I am really enjoying the vista. Clouds and water make excellent neighbors. 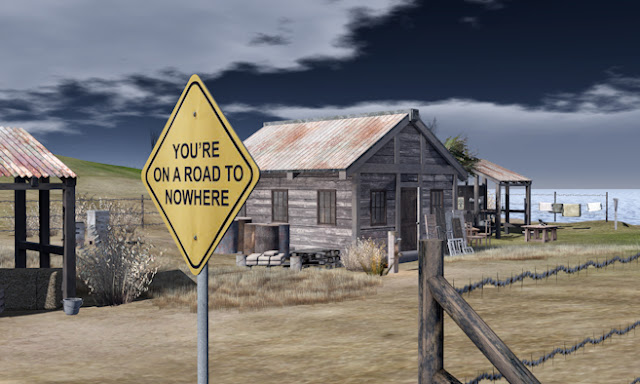 On April 15th of 2019 I was one of the first to claim a new Linden Home at Bellisseria. Beachside and reached only by a path it is a pretty private spot. After ten days with several building projects completed as add-ons to my new home, I called things finished for awhile. 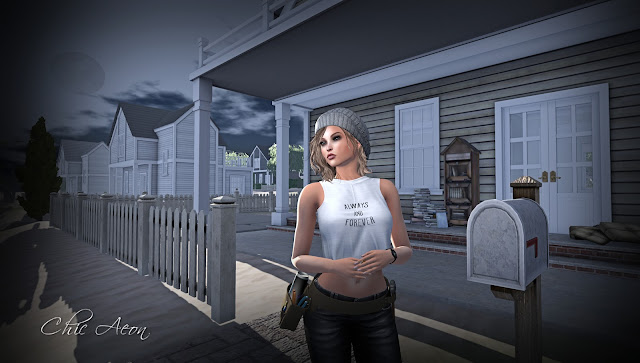 I haven't really had a "home" this last year. My building pad has taken its place, but who knows what 2019 will bring.  I may just get in the mood to "nest" again. 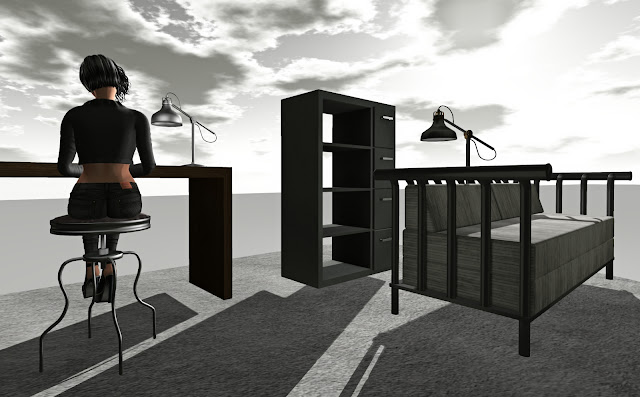 Winter of 2017 found me in a snowy cabin. Lots of seasonal photos tell the story of good times there. 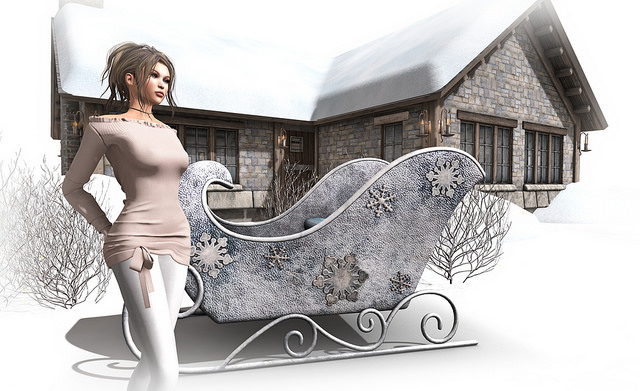 The Spring of 2017 became my industrial period. Plenty of space and lots of room to roam. I often use the warehouse as a building area and that worked well. 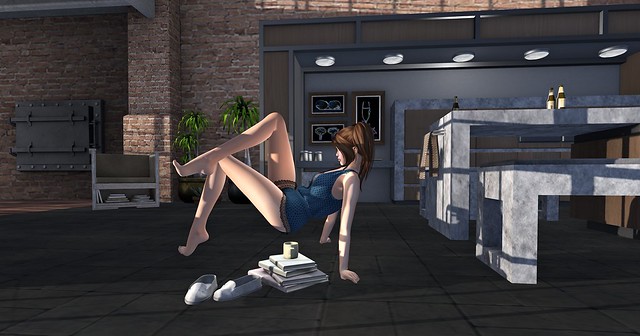 For a long while I lived in a modified treehouse (no longer trees but rock bases that I made). Much fun to decorate and very photogenic. This was much of 2016. 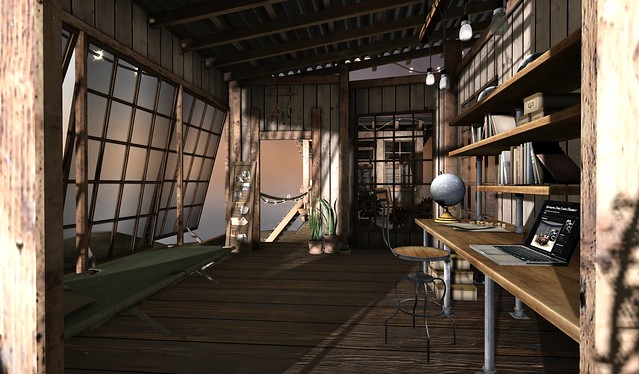 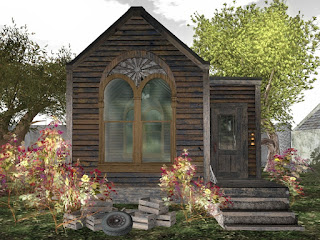 In late November I started building myself a new house. First built in Opensim and then imported to SL, I have it as a multipurpose living abode, kitty lair and sales demo. I found a lovely mainland plot next to a land trust cathedral in a pretty vacant sim (well on the ground anyway. Bushes and walls give lots of privacy and Pearl, my kitty, can roam safely.


In early November of 2015 tenants got notices that the sim had been sold. Back to my building pad -- and that's OK.

The end of July 2015 brought me to Curruid where I found (by serendipity of course) a great oceanfront house with boat access and 500 prims for a REAL bargain price :D.  I have a big building pad for blogging up in the air and Pearl, my kitty, lives happily on one of the big decks. Lots of fresh air for sure. 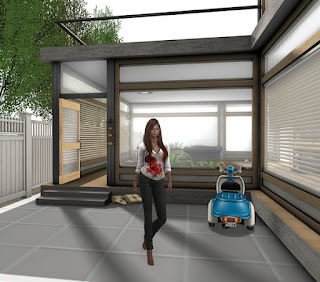 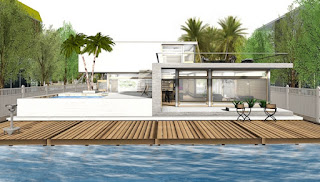 As I was getting ready to vacate LEA7, I moved to Asphyxiation Point, a role play sim and enjoyed a great people watching month. There was always something going on there and my house was superb. But with jobs on the horizon it seemed only fair to give up my house so that a current citizen could enjoy the ambiance. 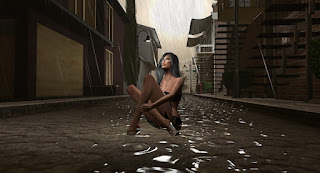 Now honestly I spend most of my time on my building pad at LEA7, BUT that being said, if I were to CHOOSE a spot in the Spring of 2014 it would be the Villas. So adding to this chronicle with a pretty photo for remembrance's sake. 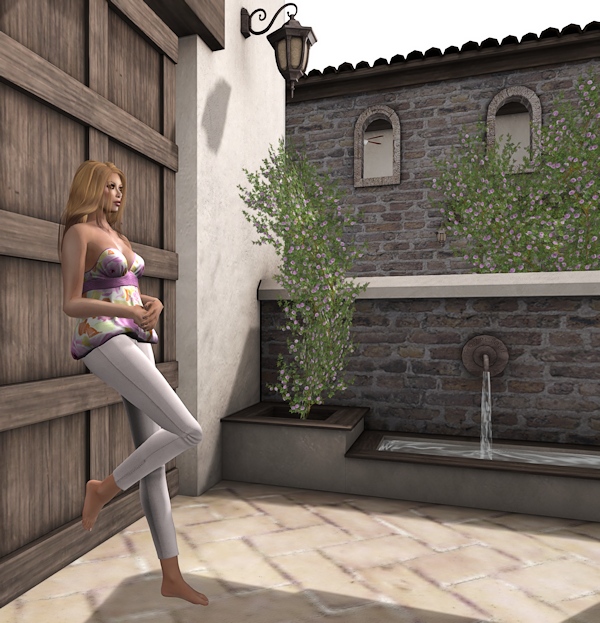 I moved into a bare industrial skybox at the beginning of June 2013. It took several months to decorate to my liking but I wasn't really in a hurry and seldom there really, again building building filming building :D. 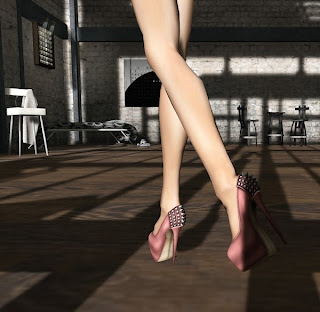 As I reread my ending statement from the preface I have to smile as updating this page has been somewhere between lax and non-existent. To be fair I stayed in my snowy abode at LEA20 until moving out in February. Then at LEA7 I was homeless, working on my building pad. Eventually I made a little place of my own in the rainy day skybox. After a couple of months I moved on and opened this area to the public. 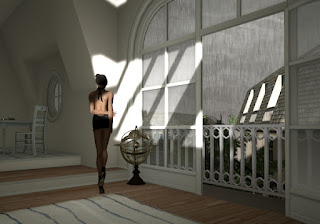 I have been SO bad about updating this page. I only know one gal that actually comes here, but I do believe in historical records so as the solstice of 2012 nears, here is a bit of catchup.

Currently (throughFebruary) I am at LEA20. A whole sim of my own to play with, it has been fun. Working really long hours for a month and a half got the sim finished. From there I have been lazing and learning.

My winter home, high in the sky finally has snowy dunes, something that I wanted for a long time and finally learned to make myself. 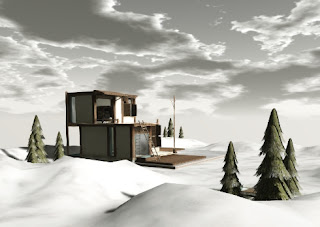 Before that I lived in Agoshima for awhile in a great little skybox with almost free rent. There wasn't any natural light though and that made taking photos difficult. Hence this is what I found in the archives -- just so that "I" remember. 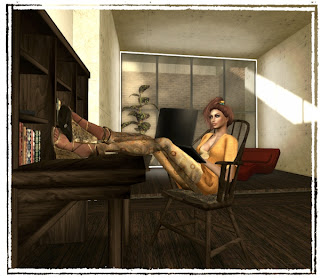 And that takes us back to where I left off almost a year ago. I was at the house by the bridge a long while. 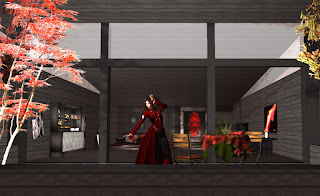 After leaving the Bayou at the beginning of November 2011, I lived where I worked at the LEA installation, The Subway. Later I added a small personal spot, but I never exactly felt like it was home. At the end of December, knowing that time was short at LEA I did some exploring and found a great view lot overlooking the giant Linden suspension bridge, a place I had always admired. So as the new year begins I am living on a 512 with all of one of the prims used. I have a phenomenal view and a very classy open to the sea abode. And free is good too. 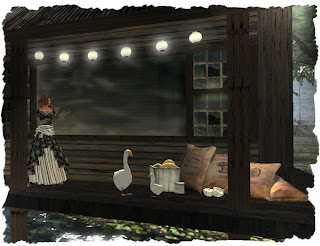 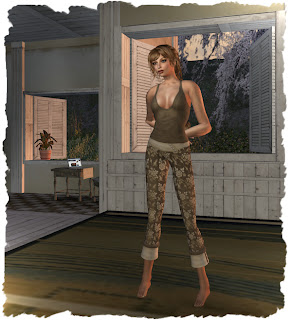 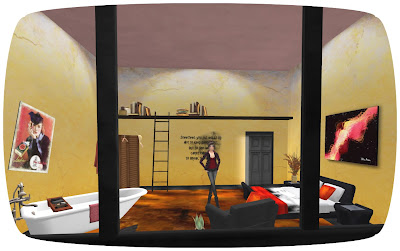 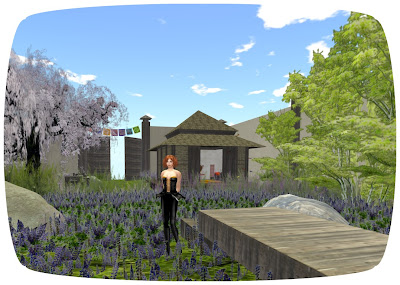 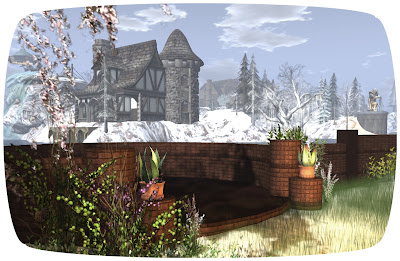 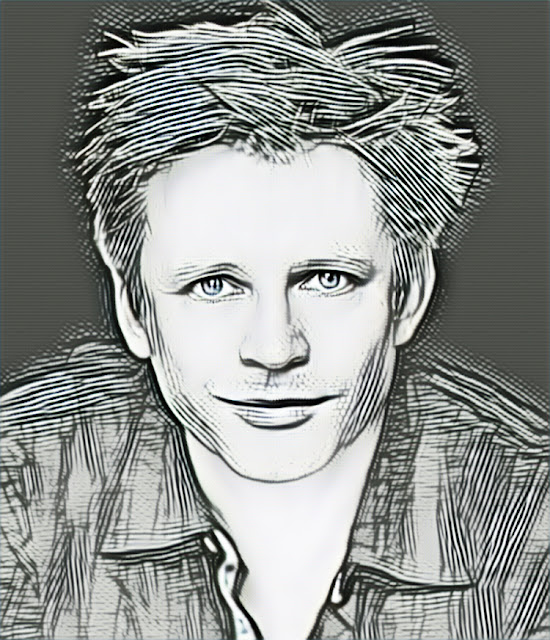 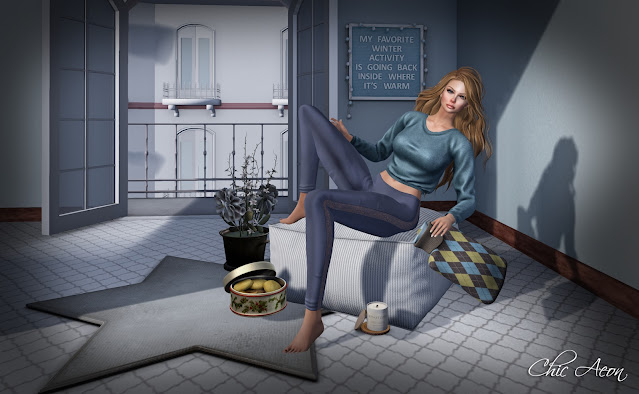 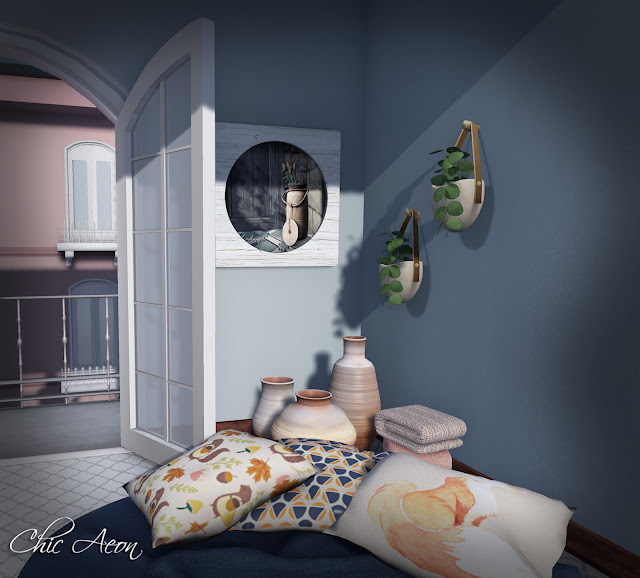