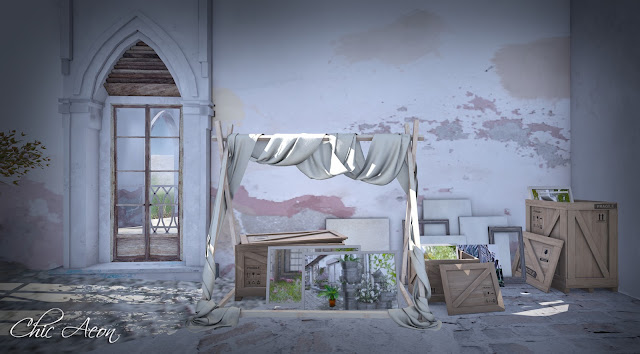 The Arcade opened on Wednesday.  For the first time EVER I got in as the bell tolled.  To be fair, I don't try all that often but I was awake -- so why not?   I was mostly after one item; the [InsurreKtion] [IK] Picnic on the Beach - Tent.  Beautifully made with good LODs and a triangle count much lower than you would expect, it was calling to me.
We were destined to become acquainted it seems; this rare items was was waiting for me on my first try. It comes with draped twinkle lights (off-on but not twinkling) that wrap around the sides and top.  Since that wouldn't be realistic with the item placed in an abandoned building, I changed the texture to transparent with a few carefully placed clicks.
I excitedly sent a screenshot to a friend who was puzzled over what it was and what I planned to do with it. There was a plan of course and a bit later I answered his question with the above photo. "Ah", he said; "that's why you are the artist and I am not".
Atelier Burgundy . Cargo Crates
Tuesdays Canvas Clutter
various homemade paintings
Scarlet Creative Serendipity Retreat 1.1
June 03, 2022