I hopped over to Sansar today to try out the newly unveiled Avatar 2.0.  I wasn't sure I was going to get to visit, but no new TOS greeted me and the viewer updated nicely.

The first thing you see when you venture into Nexusland (more on that later) is the loading message as the viewer installs or updates. 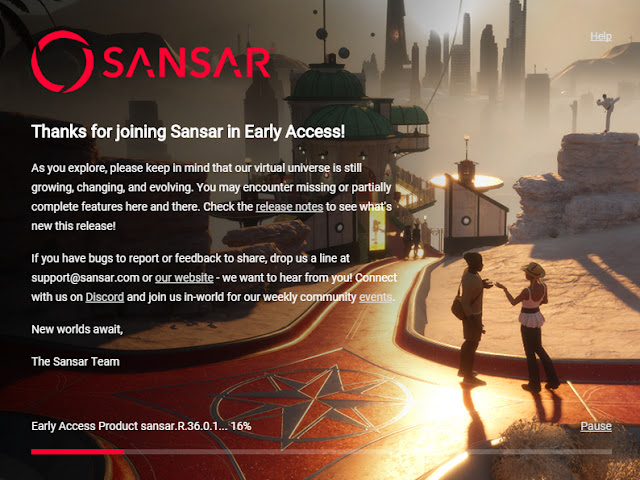 You are then given a choice of avatars, most looking pretty much the same in futuresce garb to go along with the new Nexus hub.  After choosing your avatar of the moment, you arrive at the entry to the nexus and are encouraged to go through the tutorial. I of course said, "yes".


The tutorial was fun and well done with a friendly AI character guide. There were a few skills to master.   One was walking. Unfortunately the instructions said to use the WASD keys. Those didn't work for me at all in the tutorial :D. So I stood there with the AI urging me to make my move and feeling very stupid (I mean most of a year in Sansar and I can't move forward?).  Well the ARROW keys worked for me and I made it to the next few steps.

Arriving back at the Nexus I was given more instructions for my quest. They came up in a floating sidebar. Happily I read them briefly --- because I took a wrong turn, ended up in a place that I could seemingly not get out of (oh my) and had to relog.   On relogging those goals were gone, but I remembered that I was supposed to find the EVENTS portal and a gateway etc. and I wandered enough in the main area that I did complete the quest.   I was not really sure how to claim my prize since the instructions simply said "claim your prize" so I went back to the AI questmaster and clicked on him and that apparently completed Quest 1. 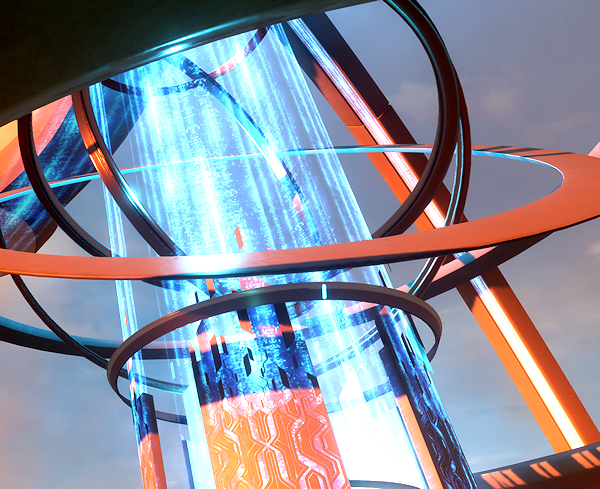 The Questmaster (my term) then sent me on Quest 2 to find another questmaster in a party pad area. Happily I had found that area while wandering in Quest 1. But when I walked up to the new AI I was told to get out of her personal space. Not too friendly.  I clicked and tried to interact with the AI that I was supposed to find as my first step in Quest 2.  Nothing happened. Nada.  So I closed the program for awhile. 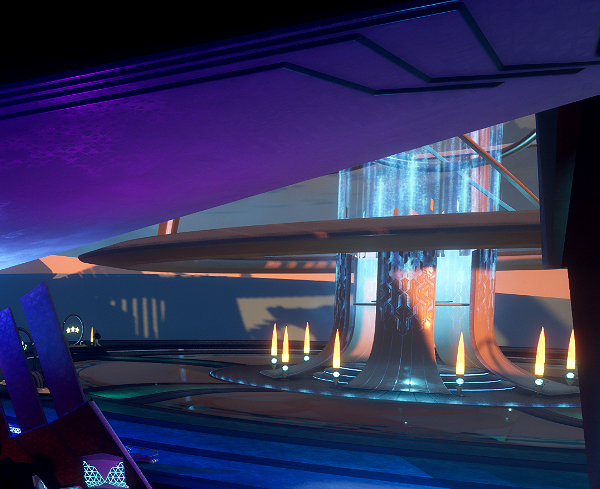 The Socialite Guild features a futuristic club in the same darkness and light theme of the Nexus.  Dancers and music add ambience. 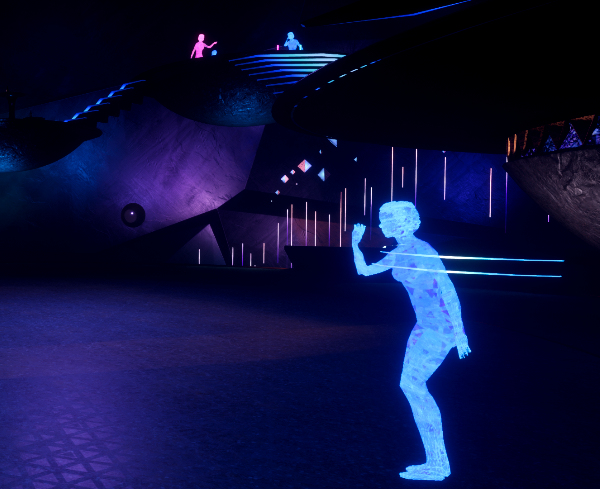 Eventually I remembered that Quests could only be done once a day -- at least that was the norm when I exited some months ago.  So while there is a Quest choice in the sidebar, I will need to wait until tomorrow before practicing more skills, I guess. [Edit: Agent Forma is evidently broken but on the list for fixing, so not a 24 hour thing.]


With the change to Avatar 2.0 not only did our avatars change, but most of our inventory that relates to avatar attire is useless.  Happily Linden Lab gave us our money back :D. 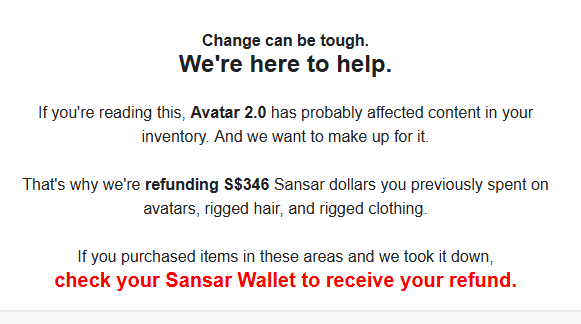 That will help with all the missing inventory.

I found that my choice of garments were limited.  I had only the Linden supplied hair, one pair of shoes -- and a fair amount of wearables that I had uploaded last year.

At the end of my journey through my new inventory, this was my look. 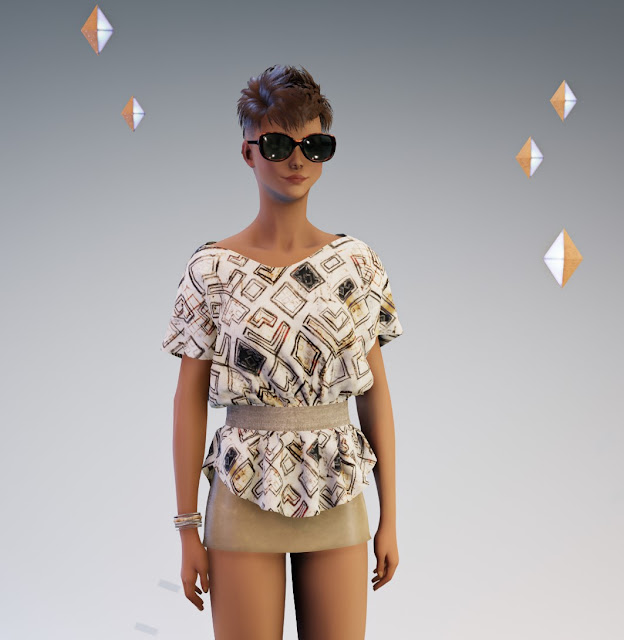 My outfit consists of Linden supplied hair and boots as well as a top and skirt made by moi with Marvelous Designer.  My MD items have been left in my inventory but were not rigged for Avatar 2.0 and so many (MOST) of them do not work well. Even those that are "keepers" take some adjusting in the customization process.  Of the accessory attachments that I had uploaded, only three pair of glasses and a bracelet were still usable.  [Edit: there is a new tool to adjust and resize attachments now. So far not documented but you can get to it from the WORN tab (little icon next to the item) when you are wearing the item. ]  Once you have your look adjusted, it is a simple click to change clothes. Good news.


One of the most impressive features of Avatar 2.0 is the face customization which is a click and drag method for finding the perfect you.  There have been plenty of negative comments on the new female avatars. They are THIN and fairly androgynous with minimal hips and breasts.  I have been a fan of genderless for years so I am OK with that, but a bit more poundage would be appreciated.  Body sliders are in the works and a "priory" which hopefully be finished as 2020 rolls in.


Now I have no plans to create again in Sansar but the current avatar eyes are one of the worst bit of newness so I did list those three pairs of sunglasses on the Sansar store. Partly to be nice and partly to see how the current process worked.  It pretty much works the same and the steps are fairly self-explanitory.

I won't really need the income from any sales -- because I will have my QUEST money  which consists of10 Sansar dollars for each quest I complete as well as some sort of points that I have no idea what to do with -- and some bonus booty now and then (at least I got a new jacket on Quest 1).

I also somehow ended up with 4,000 Sansar dollars that I have NO IDEA from whence they came.  [Edit:  I apparently missed deleting a couple of items when I closed my store :D. Silly me. Happily one is the bracelet that still fits the avatar.]


So far as tips on buying things for Avatar 2.0, I would be cautious. There are almost NO demos (I was one of the few that made them) and most of the MD clothes will not fit. Anything with long sleeves was a disaster in my tests.  Bandeau tops? Well avatar 2.0 gals have no breasts to speak of and can't keep those mini-tops where they need to reside.    None of my earrings were aligned correctly for 2.0 even though they were left in my inventory and only one bracelet mysteriously worked.

[Edit:  The MD clothing adjuster had an overhaul in the night and now MORE older things with fit with minimal adjustments. Not perfect and you need to drag things up on shoulders and out for knees -- but much better than before. Not sure WHY no one tested this before going live :D.  Still, anything made "tight" will likely be problematic, so be aware. ]

So my best tip would be to look at the vendor photos in the Sansar Store and only buy items that show the NEW avatar -- preferably wearing the garment inworld and in the dressing room.  Creators will be thrilled by the way with the better lighting and easier photo taking now available. SO MUCH BETTER!!!!


Eventually there will hopefully be choices in hair and skins and shoes and we can expand our wardrobes with those Sansar dollars in our accounts.

So that's the lowdown on my first journey back to Sansar in awhile.   It won't be a home but I plan on continuing the Quests -- just to see what they are all about.


I would like to add that while The Lab keeps moving away from the original stated focus of Sansar, I think the Nexus and AI and even the sci-fi element is likely a positive step so far as attracting visitors. It is quite engaging, certainly better than the previous entry experiences.   So I wish them success. And kudos to Sansar Studios on the Nexus hub and all it entails. Really well done.