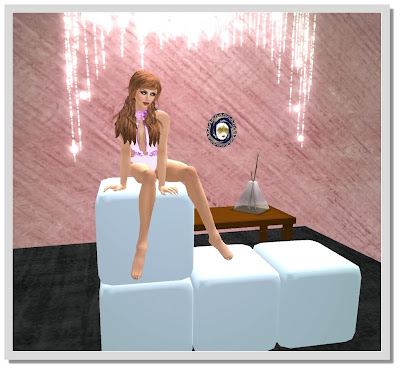 Dove and Company throw a great party. The sim has been nearly full for most of the day, but the lag was manageable. I of course wore my almost primless hunt outfit and others did too. That helps. The gifts were great. As there are some very talented designers at Festivale, I wasn't too surprised. Shown here are a few more of my favorites. I just love the glow curtains from Zut! At only two prims counting the valance, I'll be using them often :D. 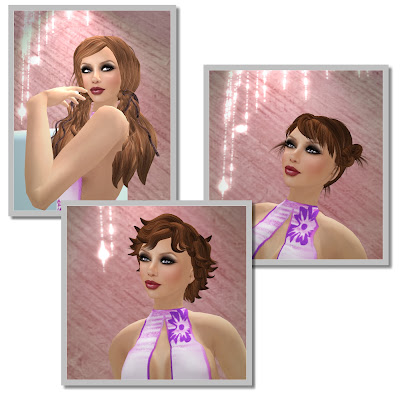 Along with lots of great poses a la last year, Tiny Bird has joined the event in a major way with five or more sets of hair. I admit to not finding one (sigh) and so who knows what might be in that poop package - LOL. Along with hair, there are some nice pale mod skins as well as some poses. It seems that Tiny Bird tried poses and Dove tried hair. While Dove's hair gets lots of points for originality, I think Tiny Bird won the contest *wink*. I am sure it was all in fun as it should be. The photos above feature both hair and poses from Tiny Bird. My personal favorite Kissy-Kissy hair has been well documented in my previous posts on the hunt. I have to admit it was difficult giving that one up in order to show you the others, but they are great too!

That's my wrap up of the second -- and hopefully not last -- Poop Hunt. Be sure and pick up your souvenir pooper scooper and pail in front of the LAP store. I now have a set for both years; let's see how many more can be added to the collection.

Go forth, have fun and SCOOP!

Festivale is the place to be this weekend.
August 28, 2009
design freebies hair poses

Dove Swanson said…
That's it, traitor! :p You are on the ban list! hee!